The proposal for a national climate council now seems to be deeply rooted.

"Creating a climate council just means a little more red tape because we already have that," said a source close to the transition. "Within the structure of the White House there are many different councils responsible for intersecting issues and problems, and that in itself can be a problem, and the climate literally extends over any problem."

As the new administration focuses on pushing the climate into a range of issues, from economics to national security, a "National Climate Council" could create redundancy, two sources said. The council could also inadvertently interfere with the work of the White House science and technology policy bureau as well as the environmental quality council, they said.

Ali Zaidi currently teaches and researches at the Precourt Institute for Energy in Stanford. He has focused on the economic effects of climate change, as well as the public and private sector responses to their financial risks from this change. Zaidi was a co-founder Sustainable business lawyers providing free legal services to startups focused on sustainability. He has also served as vice chairman of the Center for Carbon Removal, trustee of the Natural Resources Defense Council, director of America’s Promise Alliance and Generations Initiative, and co-chair of the Aspen Institute's EEP strategy group for the future of artificial intelligence and robotics . He was the Assistant Director of Natural Resources, Energy and Science in the Obama White House Bureau of Administration and Budget (OMB). Prior to OMB, he was Deputy Director of Energy Policy on the White House Home Affairs Council. and as Senior Director of Cabinet Affairs in the White House. 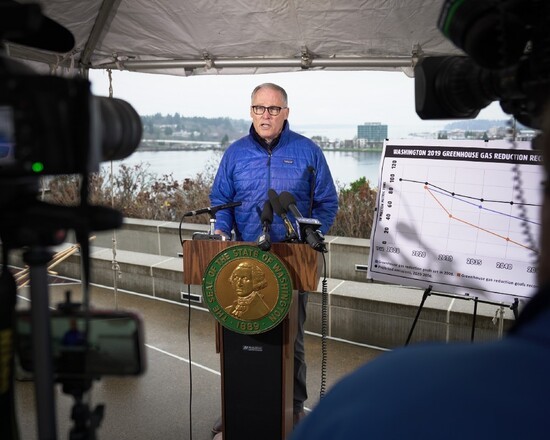 Jay Inslee has been Governor of Washington since 2013 and attended the Democratic President's primary election until he opted out in August 2019. He ran for a third term as governor that year and won re-election. Previously, he served in the Washington House of Representatives and served in the US House of Representatives for 16 years until he aspired to the governorship. During his tenure as governor and during his presidential campaign, Inslee had a strong focus on climate and other environmental issues. This included two unsuccessful attempts to get Washington voters to pass a carbon tax. For the 2020 legislative term, he tabled bills in his supplementary budget proposals to limit nationwide greenhouse gas emissions, set standards for clean fuel, increase the availability of zero-emission vehicles, set an emissions standard for ridesharing fleets, and install charging stations for electric vehicles to state facilities and extend a tax incentive for municipal solar projects that benefit low-income customers. Inslee was also named as a possible choice for the Energy Secretary, Home Secretary and EPA Administrator.

Jennifer Granholm served as Michigan attorney general for four years and governor for eight years, completing her second term in 2011. She was also Hillary Clinton's energy advisor. As governor, she announced plans to reduce greenhouse gases by 45%, signed an agreement with 12 Michigan Native American tribes to reduce those emissions, and founded the Michigan climate Action Council that produced a 125-page climate Action plan. A decade ago, she attempted to promote a transition by Michigan automakers to replace the internal combustion engine with electric vehicles, a prospect she described as "revolutionary and daunting". She urged state utilities to adopt renewable energy standards and implemented a plan to reward those who made gains in energy efficiency. In 2007 it signed a law that 10% of the state's energy must come from renewable sources. That seems tame now compared to states demanding 100%, but at the time it was a struggle to get that much. Granholm said in a 2014 interview with the now-defunct Bioenergy Connection magazine: "It should have been higher, but we managed to get that. Then we introduced a huge range of tax credits and tax incentives for different industries like biomass for wind and solar."