The other story on the news this week is vaccine breakthroughs. In the halls of the White House, the Olympic Village in Japan, and on the pages of every newspaper, there were stories of people who tested positive for COVID-19 despite being fully vaccinated. Combined with (deserved) dire warnings about the effects of the Delta Variation and a pan in some right-wing media sources towards “See, vaccines don’t work,” it is easy to assume that some vaccine breakthroughs are responsible for a significant portion of that rising tide.

You are not. As everyone from Anthony Fauci to President Joe Biden has made clear, what we are seeing now is a pandemic of the unvaccinated. Breakthrough cases, while they happen, are hardly a big deal.

There are two graphs showing the changing nature of the Unvaccinated (PU) pandemic compared to the plain old P. The first is a graph of the new cases reported daily by the Centers for Disease Control.

Daily cases of COVID-19 in the United States

The second is a graph of COVID-19-related deaths in the United States, also from the CDC. 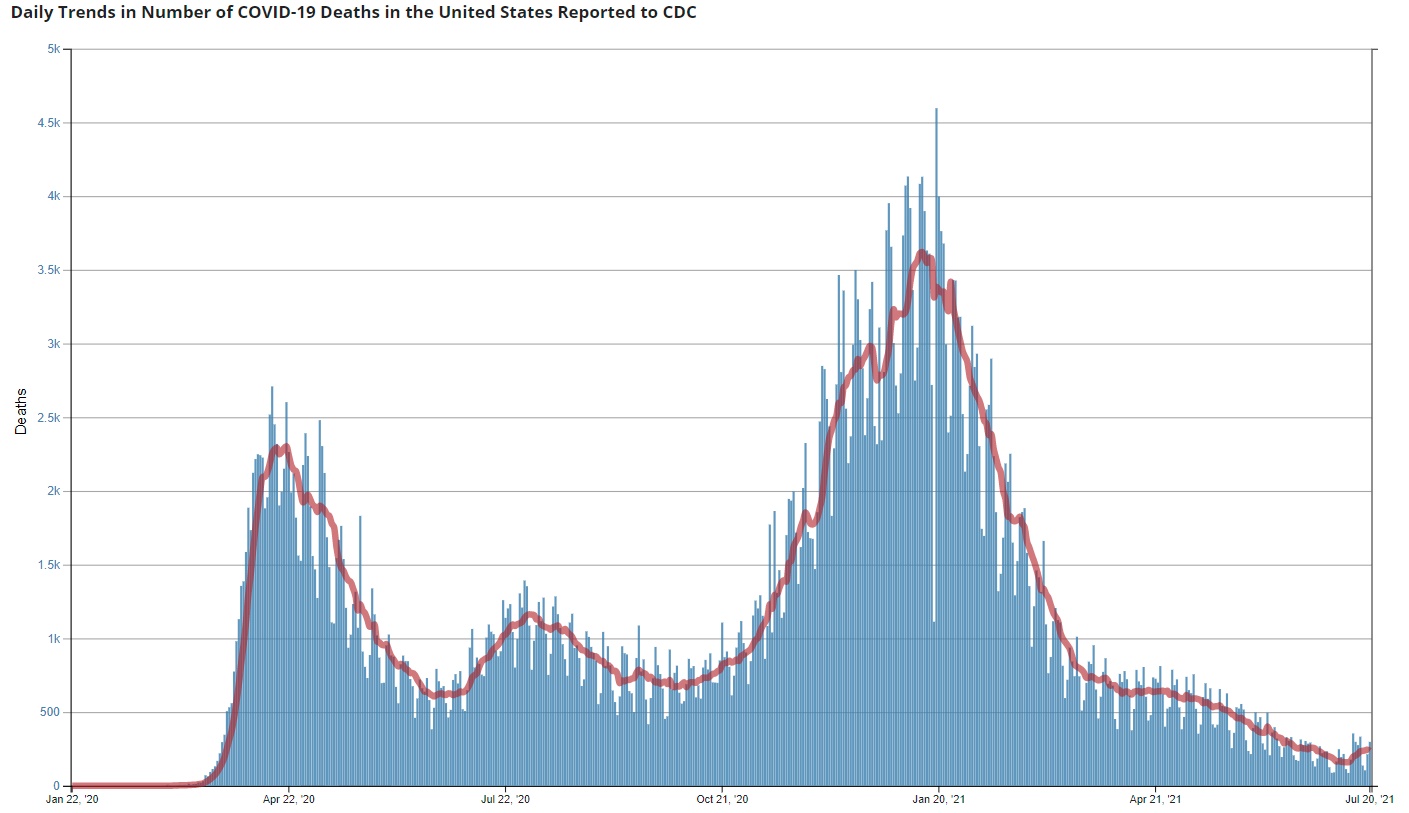 Daily deaths from COVID-19 in the United States.

This second graph shows an increase over the past week, and deaths inevitably follow new cases. But the rise in deaths is both smaller and more delayed than in previous wave waves. For example, in November, when cases rose 68% in the first two weeks of the month, deaths rose by an almost identical percentage. But in July, with cases up over 250%, deaths rose 30%. The loss of over 250 Americans per day to COVID-19 is certainly no reason to brag. However, this reflects how Americans over 65 are 80% vaccinated, which robs the disease from those most susceptible to serious illness. The Delta variant appears to be more virulent in children and younger adults compared to previous iterations of the SARS-CoV-2 virus, but not enough to make up for the difference gained by removing the older population from the table.

What is happening in the UK is an even more dramatic demonstration of this effect. Despite a huge increase in new cases, the increase in deaths has been much smaller.

So 97% of new hospital admissions are unvaccinated. And 99.5% of deaths are unvaccinated. But luckily, these deaths, at least so far, are nowhere near the levels seen when COVID-19 hit the entire population. This dramatic graphic in the UK comes despite the most widely used vaccine, the AstraZeneca / Oxford version, which is believed to be less effective than Pfizer / BioNTech or Moderna.

In fact, as the Washington Post points out, the rate of new cases in states like Missouri is higher than it was at the peak of January … except that those vaccinated are not participating. That rate is still increasing. Not only do the unvaccinated catch COVID-19 as easily as in January, with the Delta variant now accounting for 83% of all cases, but they catch it faster. As the Post reports, “The country’s summer of freedom from Covid-19 is going to be wild for half of the nation still not fully vaccinated.”

Applying the same adjustment to the nation, the rate of new COVID-19 cases in unvaccinated people is already on a “rise” and continues to rise. “The nationwide adjusted hospital admission rate has risen to a point last seen in April, and the death rate is comparable to the unadjusted May figures.”

When the numbers show over 6,000 groundbreaking cases hospitalized, it sounds like a lot. But what it does mean is that half of the population – including 80% of the most vulnerable population – only contributed 3%. Breakthrough cases are very rare. And when such cases do occur, several studies have shown that vaccinated people carry lower viral loads in their nasal passages than unvaccinated people. It’s not a guarantee, but it’s a good indicator that those vaccinated are much less likely to pass the disease on to the vaccinated or unvaccinated.

Here’s another look at the UK data comparing this huge new wave of cases to the country’s previous high, this time broken down by age group.

Vaccines work. These are the effects vaccination will have in the UK when the current third wave of COVID infections hits.

Seven-day moving average of case numbers versus deaths over days 1 to 50 of the second and third waves in the UK. The number of cases is similar, the deaths are not. pic.twitter.com/FSfuS5ZGCZ

That is amazing. That’s just great. This is exactly what good vaccine news should look like.

Now all we have to do is get the other half of the population to take, persuade, threaten or shame the vaccine. Because while the number of deaths could be declining:

In both the United States and the United Kingdom, this new wave of diseases is causing enormous healthcare costs. The long-term effects of COVID-19 are still unknown, but it is already clear that many people will have persistent disabilities that can last for years. The longer we have huge numbers of cases, the greater the chance that there will be new and more evasive variants. Children cannot be vaccinated, and children don’t deserve to get sick just because adults are donkeys.

And remember, help export existing vaccine stocks and relax the intellectual property laws surrounding those vaccines. We cannot stop this in the United States unless we stop it around the world.

Opinion: McCarthy can not shield Republicans from getting concerned in Trump’s rebellion

Monday Night time Owls: Constructing on a historical past of resistance, black girls lead these elections